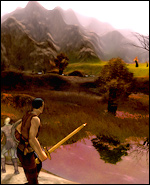 The country of Nelwë is located in a mountain range the size of a continent. Between the peaks, the passes and trails stretch out with valleys forming the dimensions of countries. These valleys turn into desolate plateaux, rocky chaos and narrow canyons where one is engulfed by roaring flows.

The inner Rhuay Sea is the largest known body of water. In the southern part it rises to a peculiar volcanic peak near which an island has formed from the lava of the eruptions. This is the Isle of Forge. Numerous lakes, many very long, are also spread throughout Nelwë.

Even if the mountains by definition have a cold climate, the valleys offer an array of environments: cold and temperate forests, arid hills, coastal cliffs cradled by sea breezes...

The Bunker can be found in High Yaalta, to the north-west of the battlefield and the village of Disttory. The goblins prepare themselves for the war with the neighbour town Guedaen in this underground building. The goblin warriors fought desperately with the nature worshipper Bark Panthers. In this area the Coal Clash Clan has extinguished even the last tree, and now only a few woodmade watchtower break the humdrum of the landscape.

The Heart of the Bramble

Deeply in the ground propagates the giant Bramble. Under the surface covered by thorny branches there is a real labirinth in the middle of which beats the Heart of the Bramble. This living Bramble was conjured by the nature defender Bark Panthers to use it as a weapon against the technology-sided Coal Clash Clan.

This city incredibly seems to be floating above the clouds. Between Etherea, this last stand for the civilization of the ancient wise men and her two sisters Blazis and Silverfall used to be a strong bond, but today only one forgotten portal leads to the town closed amongst the clouds. Here the mages, trustees of the ancient knowledge still hold the great secrets and legends of the past.

Land of the Crystals

It seems that once a huge meteor has fallen to the ground and broken apart into thousands of shards, and its traces retained only in the Crystal beings. Thus the former giant meteor's energy pulsates further on only in the hearts of Crystal beings.

Nexus, land of the Element

Vermins in the world next to the land of the Lizard-men are shut out by a magical barrier of the Lizard-men, and they are guarding it with all their power. This place is crawling with strange necroraiders, the race which was able to discover a simple way of flying with their zeppelin, and then develop it to a spaceship so that they would be able to travel in the space, too. This land hides the Cave of Three Arches as well, where the Earth Element was imprisoned by the ancients mages.

The Territory of the Savage League

This state, which is not actually one, covers the old duchy and the surrounding area. There is no centralised power other than religion. The four druids of the temple of Gaian (the largest "city" of the territory) function as leaders.

This federation brings together a half dozen valleys which had previously been conquered by the other races, the coastal steps which buffer Egreid. A high place of progress, the flying city of Cloudworks exports war robots throughout the world.

The kingdom of Egreid is a little state that, despite its central position on the peninsula of the Rhuay Sea, does not play an important role in the geopolitics of Nelwë. The dynasty which has occupied the throne of Silverfall for two centuries has always maintained a prudent neutrality in matters concerning the new ways.

The New Duchy of Steelight

Exiled from its rich territory by the rebellion of the League, the ducal family (human, traditional ally of Egreid) established itself on this little territory yielded by the goblins of Hanse in exchange for commercial partnerships. Thanks to this agreement, the goblins cannot penetrate the Egreidic market with their steam machines.

The Free City of Blazis

Situated in the very heart of the Isle of Forge, its isolated situation has allowed it to stay neutral and to prosper through the centuries, independent of all conflict. It is firmly anchored in the elementary tradition and is the cradle of the last elementary cathedral. One can only reach it by magic.

The Plaur is a river that covers the elfish Valley of Selimire and ends in a great, marshy delta. The carnivorous fairies and the various abominations that inhabit it make the place particularly dangerous. Even if the fairies are not particularly militant, nature's cause can easily convince them to invade their neighbours in Egreid.

The Creeks of the Necroraiders

Situated to the north of the coast, very close to Egreid, this region shelters the harbour laboratories of the Necroraiders. Formed by Iznahel, a necromancer who was interested very early in the scientist way, this little state is constantly searching for raw materials to carry out its impious experiments. The plunderers of the creeks infest the coasts of the Upper Egreid, and sometimes attack the ships that serve the harbours of the inner sea.