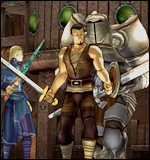 The world of Nelwë has been, since the invention of the steam machine, divided into two opposing philosophies: the supporters of nature and the supporters of science. And the moment has come where everyone must choose a camp.

The way of Technology focuses on progress; they master steam, electricity, flying machines and alchemy, but tend to seriously neglect their environment. The progress that is made hinges on nature.

The way of Nature preaches a return to the earth and ancient animist traditions. All forms of technology should be destroyed since they are harmful. Communion with the environment and respect of the balance of nature is fundamental. But this harmony with nature includes no notion of progress.

While at the beginning of the game the player belongs to one of the neutral factions, you will have to choose a side during your adventures. Numerous secondary quests, as well as numerous dialogues and path items (leaf or cog) will allow you to earn loyalty points for one side or the other.

Silverfall is an immense, intensely paced role-playing/action game within an amazing universe. In a kingdom where nature and technology are opposed, the forces of evil seize magic places in order to take over their power.

Incarnate a hero and progress in a fantastic adventure full of numerous quests. Explore a fantasy world and discover an innovative magic environment. Get ready to face countless terrifying creatures and formidable bosses that inhabit the lands of the Nelwë kingdom. Develop more than 130 spells and skills and surround yourself with the best companions to become the hero who will combat the coming of the Order of Nothingness.

To win, the player must take sides between the two great powers that share the world today: nature and technology. Throughout his adventure and during each quest, the player will be able to make choices leading to one way or the other. The choices influence the game in several ways:


In Silverfall, a whole trove of skills is unlocked (gradually according the player's progression) that is inaccessible by choosing the other way (but which can be replayed in that way, as well).

The more the companion complements the strengths and weakness of the player the higher the possibilities of success. You can also impose an "attitude" on your companion in the beginning of combat (attack, defence, neutral, stay ready, etc.). The personality of the companion, his skills and attributes, the customisation of his behaviour, and his effectiveness varying according to the type of relationship are some of the ways variety enters into the combat.